DAYTON, Nevada - On Saturday, December 14th, Dayton Intermediate School (DIS) hosted a Lego Robotics competition and had a few standout teams.  DIRT (Dayton Intermediate Robotics Team) from DIS won 1st in Robot Performance and 2nd Place Overall!
Crooked C3PO's from Riverview Elementary School (RES) placed 1st in Robot Design!
In addition, DIRT, Crooked C3PO's, Skittle Sabers and Fluffy Wookies - teams from the Dayton area Schools, all qualified for the next round of the Lego Robotics competition to be held at Carson Middle School in January.  Only 10 teams qualify for this next competition and 4 of them are from Dayton schools!
CONGRATULATIONS TO ALL OF OUR TEAMS MOVING ON!
At the Lyon County School District (LCSD) Board Meeting on Tuesday, December 17th, Trustee John Stevens applauded the efforts of these teams and the staff who brought this incredible opportunity to the students.
visit page

Click on the link below to read more about our new designation at “CarsonNow.Org”. 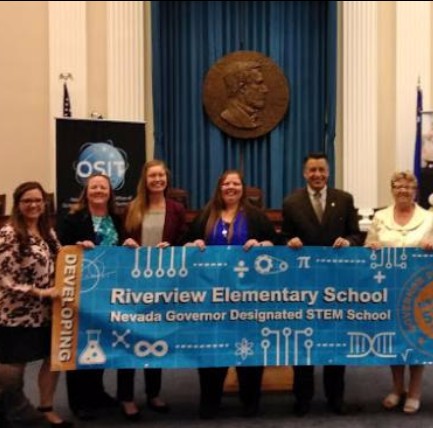 Welcome to the SchoolBlocks
self-guided tour!

The most common question we receive is, how is SchoolBlocks inspired by Pinterest? SchoolBlocks eliminates navigation bars and uses a block style layout that’s similar to Pinterest. It creates a unique and engaging browsing experience, optimizes for mobile and removes a lot of navigational complexity.

Please click on the red plus signs found on this page to learn more about specific features.

This icon appears when you have edit permissions. Hold your mouse down and move the block. You’ll see the page reorganize!

Each block type has a custom editing experience. Click the pencil on any block or view our help documentation to learn more about block types.